Now the New Year has dared to show its face, I thought I’d serve a little reminder of two terrifying treats coming your way through 2017
********** 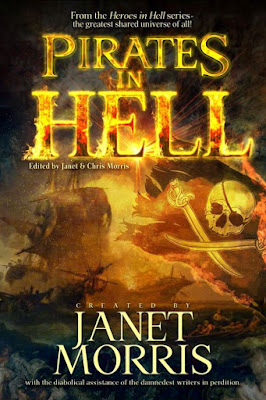 In Pirates in Hell – the very latest installment from Janet Morris’ critically acclaimed Heroes in Hell shared universe – we see the underworld in uproar as the coastlines can’t seem to decide what to do.
Along with all the usual mayhem we’ve come to love, new land keeps appearing where nothing but turbulent seas once held sway. The thing is, the opposite also holds true, and it is with horror that many denizens of latterday hell are forced to watch as firmly established landmasses and coastlines disappear beneath those same waves.
It begs the question…
Why is such upheaval occurring? And what are the characters we know and hate going to do about it, if anything?

All I can say is, Daemon Grim is bound to be kept busy.

Dispatched to Skull Isle – a lethal deathtrap in the middle of a wide, inhospitable ocean – the devil’s Reaper is forced to counter traps and snares, and deal with brewing mutiny and rebellion while doing his damndest to retrieve something of greatest value to
His Satanic Majesty.

But don't forget, what’s of value to one damned soul, is worthless to another.

And why is Grim being so tightlipped as to what this buried treasure actually is?

One thing’s for sure, there’ll be more than 15 men on a dead man’s chest by the end of this tale of woe. But don’t take my word for it – Check out Pieces of Hate – the latest escapade setting sail your way this spring in…Pirate’s in Hell.

And talking of springing forward… 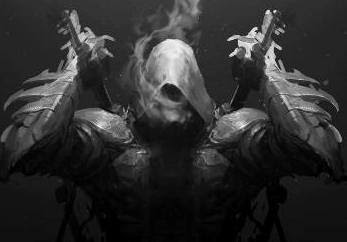 A new novel-length adventure from the Reaper himself.

Have YOU ever bitten off more than you can chew?
Feared throughout the many circles of the underworld, Satan’s Reaper – and chief bounty hunter – Daemon Grim, is known as a true force to be reckoned with.
Having eliminated a major player in the uprising eating its way like a cancer through the underbelly of hell, Grim is stunned to discover he cannot afford to rest on his laurels, for the rebellion runs far deeper than was ever imagined.

Ever keen to test their mettle, the Sibitti – personified weapons of the ancient Babylonian plague god, Erra – also appear eager to capitalize on the growing unrest.

If YOU like scaretales that encourage you to slip past the fringes and into the shadows beyond, then you’ll love what’s coming your way…soon.
Posted by Andrew P. Weston at 8:32 AM