Interview with the Grim Reaper 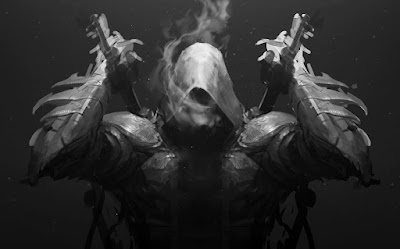 Name: My name is Daemon Grim


Age at death: I have no idea. I only know I look about thirty-five years old.


Please tell us a little about yourself.
I’m the Reaper. And yes, before you ask, I’m that Reaper, Satan’s bounty hunter. As the title implies, I hunt down and silence anyone who is – or is likely to become – a threat to infernal security, or an embarrassment to Satan’s infernal or demonestic policies.


How do you think you ended up in Hell? What sins have you committed?
Who I was before I came to Hell, or what I did, I haven’t got a clue. There’s a hole in my mind that prevents the retention of any memories from the time before. My first recollections of unlife are of waking up before a roaring log fire, in the presence of His Satanic Majesty himself, and being welcomed home like a long lost son. It was He who invited me into his inner circle, and appointed me to what was to become my true vocation. I haven’t looked back since.


Describe your appearance in 10 words or less.
Your worst nightmare, attired in kick-ass, gothic ensemble.


Where do you live in Hell? Tell us about your residence and area.
My suite is situated at the top of Black Tower, in what humans would call, the Tower of London, smack-bang in the middle of Olde London Town itself. For those who don’t know, that’s in the Juxtapose level of Hell. I’ve lived there since I can remember. My Hell Hounds, (fellow bounty hunters) and the Inquisitors, (Satan’s Special Interrogators), have their own apartments there as well, so we can be close to our base of operations.


The entire complex and grounds is known throughout the many layers of the Underworld as the Den of Iniquity, but my team and I just refer to it as The Den.


Juxtapose is a great place to live, as its environs constantly blend into other epochs and levels of Hell. You can be walking along a busy, traffic-clogged street one minute, and find yourself having to jump out of the way of a horse-drawn carriage as it clatters along cobbled Victorian roads the next. It’s confusing when you first arrive, but once you get used to it, well…I wouldn’t want to stay anywhere else.


Do you have a moral code?
Yes, I have a moral code, I never lie. I know that might sound weird, coming from a denizen of Hell, but I’m keenly aware of how my role reflects on Satan’s integrity. So, I always ensure to act in a way that can never be criticized. And when it comes down to it, I’ve found displaying such a trait really strikes fear into the hearts of my prey. Once I’ve been set on you, there’s no escape. I can’t be bribed, fooled, or conned. I don’t feel sorrow or remorse. If you appear on my list, you’re dead. You might as well turn yourself in at the Undertakers and save yourself a lot of bother. Annoy me and make me work for it – and I’ll let my Inquisitors cut you up and feed the choicest parts back, bit by juicy bit, before they let you pass on.

Do you get any time for enjoyment, apart from your job that is?
Sure. I think it’s important to get away from relentless blood-letting now and again. It keeps my mind sharp. So, I like to sex things up with those few who have the stamina and fortitude to stay alive at my touch, and I listen to music a lot. Because of my antiquity, I have tastes that range from classical to modern. My preferred classical pieces are Camille Saint-Saëns, Danse Macabre and The Isle of the Dead by Rachmaminov. But I also listen to Bauhaus, Sisters of Mercy, Evanescence, Nightwish and Clan of Xymox.


Any particular favorites?
It depends on my mood. Although I’m always in the mood for Mojca Zugna and Floor Jansen. Or were you asking about the music?

Do you have any phobias? Are you plagued by anything particular in Hell?
Other than the dread of not being able to track down and capture a fugitive from injustice, I don’t have any phobias. But I must admit, when I’ve been away from the Bâlefire for too long, I get plagued by the strangest dreams of falling stars, burning skies, and gaping pits of dense darkness from which nothing can escape. If only I could understand what they all mean, I think I’d be that bit closer to understanding my origins.


What do you think Satan’s most creative punishment is here?
Ha! Without a doubt, the twisted idea of giving the masses what they crave, so long as it’s perverted in some way. For example, there’s nothing quite like witnessing the suffering of some poor fool who happens to be the world’s most accomplished pianist, only to watch him literally crash and burn before an audience. And there’s so many ways to torment them! I’ve watched several souls begin to play, only to forget how to read music midway through their recital. In other cases, their finger bones might break during the chorus, or they’ll be driven mad by the notes they hear. I’ve even heard of one idiot who was determined to create a new opus magnum, despite the fact Satan had blighted their hearing, and cursed them with a form of tonal dyslexia. It was hilarious listening to the beginning of an absolute masterpiece, only to watch the performance disintegrate into utter farce by the close of the first movement, because what they’d written ended up sounding like total gibberish.


You can probably appreciate why I love it here so much.


Who are your friends here?
Because of the sheer volume of souls I’m sent to reap, I keep my circle of friends small, and limit them to just the Hell Hounds and the Inquisitors.
For those who don’t know them, the Hell Hounds are as follows:


Nimrod, King of Shinar, and my lead Hound. A mighty hunter in opposition to God. Then there’s Yamato Takeru, otherwise known as Prince Ōsu. Yamato is a legendary ninja killer from first century Japan, who brutally murdered everyone who ever stood in his way. My final hunter is a guy called Champ Ferguson, a notorious Confederate guerilla fighter and butcher from the American Civil War.


Then we come to the Inquisitors.
First of all, I have to mention the person who keeps me sane. Strawberry Fields, aka Red Riding Hood. She’s a siren of death who will happily eat your liver as she showers you with kisses.


Then there’s Leonard Skeffington, a previous Lieutenant of the Tower of London itself. We affectionately refer to him by the pseudonym, Crusher, as he invented several remarkable torture devices in life that we still use today.
Baron Ferenc Nádasdy, a sixteenth century Hungarian nobleman, and his wife, Elizabeth Báthory come next. While relationships are usually frowned upon in the Underworld, His Satanic Majesty has made an exception for these two.


Ferenc goes by the codename, Red Baron, a tongue-in-cheek reference to the foes he has vanquished in battle. For a denizen of Hell, he’s an honorable man, who prefers to give prisoners a chance to spill the beans before he spills their guts. History refers to his wife as, ‘the Blood Countess’, but we know her as, Nutcracker Sweet, because of her fetish for crushing certain parts of male prisoners anatomy.
Finally, there’s Myra Belle Star, aka, Black Velvet. An infamous outlaw from the end of the nineteenth century, Myra is a crack shot, who has adapted to the position of Inquisitor rather well.


Who are your enemies?
Everyone who has ever been condemned to Hell, for I’ve reaped their souls a thousand times, and will continue to do so until creation falls.

You mentioned relationships are frowned upon? Does that make life difficult?
Not really. I am one of the few denizens who is allowed the freedom of expressing my desires in any way I wish. Of course, my Dark Father has seen fit to capitalize on this golden opportunity in a typically sadistic way. Remember, anyone I touch – skin to skin – dies instantly. A bit of a bummer during those intimate moments, unless that person also happens to have special dispensation.
Ah, you’ve gotta love His sense of humor...(Bastard!)


What do you think about your author?
I’ve followed his life closely ever since he faced-down a poltergeist in one of the homes he’d grown up in. (One of ours, in fact, a Dread-Lock). Despite the fact he was only three, he would not back down and kept testing the wraith to see what it would or wouldn’t do. Even the nightmares we triggered backfired. In the end, the sneaky bugger seemed able to recognize he was sleeping and gained control over his dreams. We saw potential, and steered him along a certain lifecourse after that. Talk about fruitful...especially his military life. But that’s another story. (You get a clue from his team nickname – Red)...and it has nothing to do with the color of his hair)

Please give us an interesting and unusual fact about yourself.
Despite the fact I’m out and out evil, I have to recharge my essence on a regular basis in one of the most powerful satanic power sources in existence, the Bâlefire. Without its arcane puissance, I would lose my augmented strength and become like anyone else. Weak and pathetic.
Apart from that? I’m really light on my feet, and just so happen to be a pretty good dancer. I’d be fantastic, if I could just get a partner who managed to stay alive long enough. (Where’s Amy Lee when you need her?)


Oh, and I’ve also been told I’ve got “Come-to-bed” eyes. So long as that means your deathbed, fine.


Which books do you appear in?
I was introduced in a short story...Grim, in the “Doctors in Hell” anthology from Janet Morris’ Heroes in Hell universe.


I had to keep it tame there. Now I’ve been granted my own adventure, expect things to get brutal, bloody and downright wicked.

This is the link to Hell Bound: