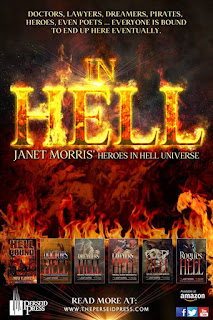 I know some of you will have a burning desire to understand why the Heroes in Hell Universe keeps getting bigger and better?

You see, every year another facet of the foul and fiendish creation that is Janet Morris' Heroes in Hell Universe is examined, expanded, and expounded for you to savor in the dark and delicious depths of your own nightmares. And those who wish to contribute to such a landscape are hard to hold down. Escaping the asylum of the mundane, they delve into chaos and disorder, to bring you only the very best in what's abnormal.

This year will be no different, for soon, you'll be able to gorge yourselves on the  gruesome, the gory and the grotesque. But how else would you expect pirates to act? Coming the Fall. Pirates in Hell - where together, we'll sail the seven seas of rue.

Find out more at: