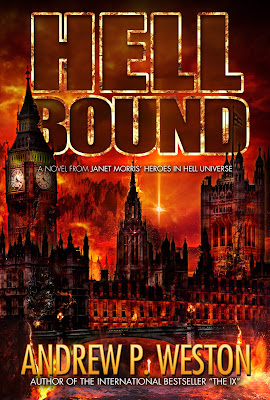 A compelling and a fascinating venture into the world of unsequestered villainy. Highly inventive and enthralling.
Fanboy Comics

Hell Bound is an epic and fast-paced adventure which kept me reading to the last page.
Black Gate Fantasy

In hell, none of the condemned believes they deserve to be there. And that’s fine, so long as they’re not foolish enough to try and do anything about it. For those that do, there’s always Satan’s Reaper–and chief bounty hunter–Daemon Grim.
Feared throughout the many layers of the underverse, no one in their right mind dares to cross him.

However, when Grim discovers that someone has attempted to evade injustice, and seems hell-bent on gaining access to ancient angelic artifacts proscribed since the time of the original rebellion in heaven, circumstances point to the fact they may be doing just that.
The question is...why?

As you can imagine, Grim’s response is bloody, brutal, and despicably wicked.
Hell Bound – In hell, everyone can hear you scream