Heroes in Hell
The Latest Chapter 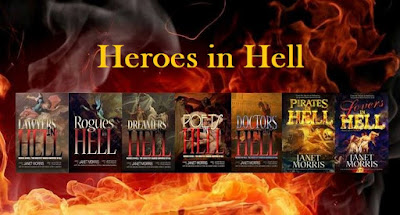 As I mentioned in my previous blog item, every year sees another layer added to the foul and fiendish creation that is Janet Morris' Heroes in Hell Universe. With good reason. When you look at the simmering cauldron that is mankind and the pathetic specimens who lurk in its darkest corners, it doesn’t take a lot to skim the dross and sift out the dregs.

Yes, humanity is saturated with potential to fill the streets of latterday hell with a never-ending stream of fresh souls. Lawyers; rogues; dreamers; poets; doctors; pirates and lovers. Satan welcomes them all, and his Reaper is always ready to pile on the torment.

That’s great news for those of us condemned to contribute to the Heroes in Hell universe for the rest of infernity. Because as the populace of hell continues to swell, so does the opportunity to write about it. I guess you could say that the expanding volume of damned souls is directly proportional to the increasing volumes available for you to read. (I know . . . hit me later!)

What seditious segment of society has been targeted for reassignment on the Undertaker’s Slab, only to be served up for your misentertainment?

Well, I’m glad to announce, that the next installment of Heroes in Hell is. . . 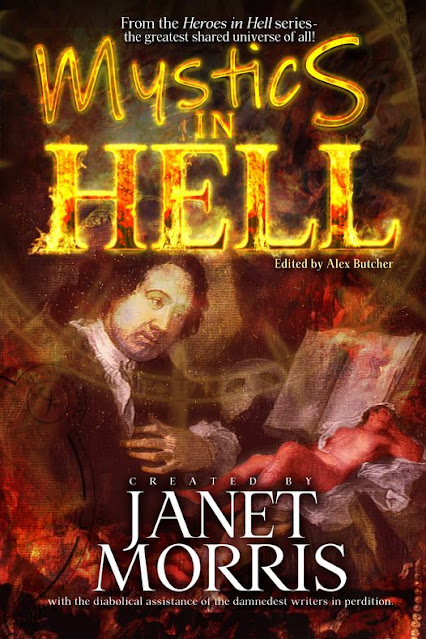 And you won’t need a crystal ball to tell you that for the charlatans in question, fortunes are about to spiral out of control.

Well, as I mentioned previously, I have the privilege of contributing to the Heroes in Hell universe in two ways: through the themed anthologies, and more comprehensively, via those adventures relating to Satan’s Reaper and Chief Bounty Hunter, Daemon Grim.

Now, if you’re new to the Heroes in Hell universe, you won’t be aware of an important facet of Daemon Grim’s history. A facet best summed up by the contents of an old blog relating to how I came up with a character that would become integral to HIH canon:

As you can imagine, Heroes in Hell gives me an excellent playground in which to set my characters free. But, how did I come up with the character of Grim specifically?

Ah, that was quite easy.

First of all, I did my homework.

Hell is a wondrous place, where all sorts of dastardly deeds are allowed to spiral out of control. However, the HIH concept has certain rules – certain limits and boundaries. In devising a character, I didn’t want to create ‘just another someone’ – you know – another unhinged psychopath who creates mayhem wherever he or she goes. (Well I did, but I wanted them to bring a certain order and pedigree to the universe).

So I thought…what if my main character was someone close to Satan himself? Someone powerful and fiercely loyal? Someone who was the worst of them all and who stood out because he leads by the purity of his service and example he sets? And to add a certain fear factor, what if that character was cursed with the bane of never being able to lie? Someone who turns such a trait to his advantage to create a dread and chilling reputation. He’s bold, brash and confident, because he's perfectly capable of carrying out whatever assignment he’s given.

When I checked the lists, nobody had thought of using a character deeply interwoven into mythologies and fabric of multiple cultures around the world …The Grim Reaper.

I relished playing with a character like that because not only is he the ultimate killer, but such a persona would be great fun to build a personality profile around. The scope he presented would weave through all the storylines as if he’d always been part of it.

This is the kind of guy who – if you appear on his list – you’re dead. Simple as that. You can’t buy, bribe, or wheedle your way out of it. And to make it even more unsettling, I’d give him one of the most outrageous sense of humors anyone could ever wish for, and a degree of loyalty toward his team that is almost paradoxical. But for all that, if Satan’s decrees it, he’d still snuff anyone out of existence without the slightest remorse.

And the final twist?

After consulting with Janet from the outset, we decided it would be a great idea to have Daemon Grim’s adventures maintain their continuity by evolving from the original ‘breakout’ short story (Grim – Doctors in Hell), and then leapfrogging from anthology to novel and from novel to anthology

As such, the Reaper’s story arc covers:

Pieces of Hate – Pirates in Hell

And now, in this latest anthology, Mystics in Hell, I’m delighted to announce that Daemon Grim’s exploits continue in The Sorcerous Apprentice, a murder, mystery misadventure, revealing how Satan’s Reaper is forced to turn to the Al-Jinn of Jahannam for help in ridding the undervese of a pandemic threatening to undo everything that Satan has worked so hard to achieve.

It’s diabolically dark and delicious. And even better, the Sorcerous Apprentice is only one of a number of stories that clearly reveals how you can’t second-guess those with second sight. Be they psychic, prophet, soothsayer or clairvoyant, none of those possessing extra sinsory perceptions can be relied on to reveal the truth.

For more information, keep an eye out on further details, soon to be revealed in both;

Mystics in Hell.
A fetish-filled extravaganza that will charm your socks off and toast your toe-tems. (And yes, you won’t need a crystal ball to know it’ll be a puntacular page-turner of epic proportions).

Do yourselves a favor.
Avoid the need for further diabolical double-entendres by making sure you get your copy as soon as is inhumanely possible