How The Devil Did You Do That? 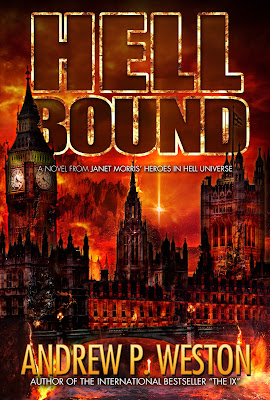 How did you devise the Reaper’s character and the world in which he was set?

The answer to that is twofold.
As many will know by now, Daemon Grim is Satan’s go-to guy in times of trouble, and the leader of two very special teams: The Hell Hounds, (Fiendish bounty hunters) and the Inquisitors, (A very select bunch of diabolical characters who form Satan’s elite interrogators).

The world in which they are set is perhaps easiest to answer first, because all stories take place within the Heroes in Hell Universe.

Heroes in Hell is a series of shared world fantasy books, within the genre Bangsian fantasy/horror, created and edited by Janet Morris and written by her, Chris Morris, C. J. Cherryh and others. The first 12 books in the series were published by Baen Books between 1986 and 1989, and stories from the series include both Hugo Award winners and Nebula nominees.
Janet continued the series through her own publishing company – Perseid Press – from 2011 onward with, Lawyers in Hell, followed by five more anthologies and a novel since then.

Basically, the shared world premise of Heroes in Hell (also called The Damned Saga) is that all the dead wind up together in Hell, where they can pick up where they left off when still alive, except that now, it’s a no-holds-barred, rollercoaster ride of violent, stab you in the back adventure. Anything goes – and often does...

So, there’s the answer to the second part of the question. I answered that part now, so you better understand the foundations I needed to lay out for the main character.

Next time, I’ll let you know how the character I devised became Daemon Grim. It’s more complex than you think.