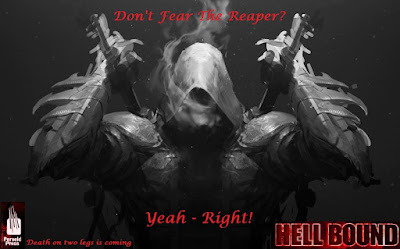 Last time around, I explained a little bit about the Heroes in Hell universe in which Daemon Grim exists. As you can imagine, Heroes in Hell gives me an excellent playground in which to set my characters free. But, how did I come up with the character of Grim specifically?

Ah, that was quite easy.

First of all, I did my homework.
Hell is a wondrous place, where all sorts of dastardly deeds and fiendish fun is allowed to spiral out of control. However, the HIH concept has certain rules – certain limits and boundaries. In devising a character, I didn’t want to create ‘just another someone’ – you know – another unhinged psychopath who creates mayhem wherever he or she goes. (Well I did, but I wanted them to bring a certain order and pedigree to the universe).
So I thought…what if my main character was someone close to Satan himself? Someone powerful and fiercely loyal? Someone who was the worst of them all and who stood out because he leads by the purity of his service and example he sets? And to add a certain fear factor, what if that character was cursed with the bane of never being able to lie? Someone who turns such a trait to his advantage to create a dread and chilling reputation. He’s bold, brash and confident, because he's perfectly capable of carrying out whatever assignment he’s given.

When I checked the lists, nobody had thought of using a character deeply interwoven into mythologies and fabric of multiple cultures around the world …The Grim Reaper.
THE Grim Reaper. Ding Dong!

I relished playing with a character like that because not only is he the ultimate killer, but such a persona would be great fun to build a personality profile around. The scope he presented would weave through all the storylines as if he’d always been part of it.
This is the kind of guy who – if you appear on his list – you’re dead. Simple as that. You can’t buy, bribe, or wheedle your way out of it. And to make it even more unsettling, I’d give him one of the most outrageous sense of humors anyone could ever wish for, and a degree of loyalty toward his team that is almost paradoxical. But for all that, if Satan’s decrees it, he’d still snuff anyone out of existence without the slightest remorse.

This guy can go everywhere and anywhere. As such, not only will you be seeing him in his own adventures, but in subsequent Heroes in Hell anthologies too. After consultation with Janet Morris - the creator of the Heroes in Hell series - we thought it would be a great idea to have a character whose adventure leapfrogged from novel to anthology, anthology to novel, and so on and so forth..

Stay sharp…you’ll never know when he’s coming to a nightmare near you! 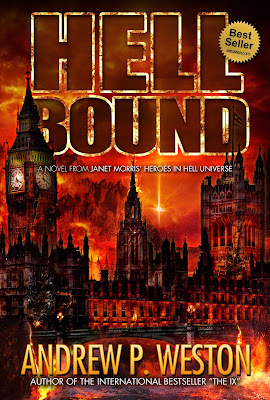