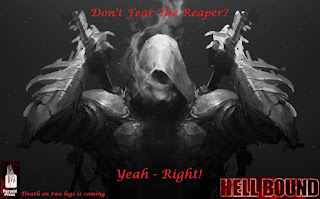 *************
Suddenly, I realized I wasn’t alone. A young couple, high on chemicals and hormones, exited an alley near the apartment block. Goths from the look of them, and dressed to the nines in photonegative chic. Even with mundane sight I couldn’t miss them. Dripping with metal, they chimed and rattled with every step, and had obviously decided to end their festivities early. From the way they gnawed each other’s faces and necks, they were oblivious to my presence as well as the rain, and were clearly intent on taking their personal party home.
Nice one, kids. A part of me—just a tiny part—responded to their lust. Enjoy yourselves while you can. You never know when death will come calling.
Passing close by, they spotted me at the last moment. You’d have thought there’d be some form of camaraderie with the way I was dressed. But oh no! Recoiling as if my mere proximity would guarantee their demise, they quickly crossed the road, all thoughts of passion forgotten. Glancing repeatedly back to see if I was following, they didn’t regain a measure of their former exuberance until they were almost to the end of the street.
I didn’t take it personally, and let them go. I have that affect on others, which is why I live a life of self-inflicted solitude and cold-hearted service. Whenever I get lonely, I pay Strawberry Fields a visit. She’s always accommodating, and so far she’s the only one who seems to appreciate my distinctive tastes.
The shower became much heavier. Drumming a relentless staccato across the asphalt and parked cars, it seemed every drop was desperate to tell me its story. I found the beat hypnotic, one that would easily soothe me to sleep if it went on for too long.
Fortunately, the light flicked out in the window opposite.
At last.
As if on cue, a mystery sedan materialized from out of nowhere. Purring sedately, it glided to a halt right outside the apartment block. The engine was so quiet I could barely hear it above the tympanic greeting of the downpour.
I heard a brief hum as an electric window edged down.
Moments later, both front doors opened. Two hoods adorned in tan cashmere overcoats emerged from the climate controlled interior. Their stony expressions creased slightly under the assault of the weather. From the way they ducked their heads and muttered, you’d think they were being stung by hornets. Their not-so-tough-guy reaction to a bit of water didn’t earn any sympathy from me.
The driver carried a long black umbrella. But it’s wasn’t for him. Shaking it loose, he quickly walked to the other side of the car. Opening the rear door, he held the umbrella high and waited for the main attraction to emerge. When she did, I could appreciate why she wouldn’t want to get drenched.
A goddess uncurled herself from the seat. Even from the shadows, I could see the luster of her raven-blue hair. It cascaded down her back, a shimmering satin waterfall of purest silk. Like me, she was dressed from head to toe in black, only her ensemble was embellished by bright red nails and full scarlet lips. She had green eyes, like a cat. Piercing and predatory.
Tucking a clasp bag under her arm, she nodded her consent, and the entourage began to move slowly toward the main door. As they approached the lobby, her escorts scanned the street for any signs of unwanted scrutiny. Their hands hovered within the opening of their jackets, telltale bulges signifying what they carried there. The woman’s heels clicked sharply. Echoing down the street like a metronome, each measured step was designed to navigate her safely across the slickness of the sidewalk.
She was beautiful, but like me, she was deadly. A black widow of unholy appetites. Within moments, the spider had ushered her lackeys into the building where I had no doubt she’d begin weaving her web.

*************
If you enjoyed that and want to find out more, just follow the links in the sidebar or go to Daemon Grim's Facebook Page 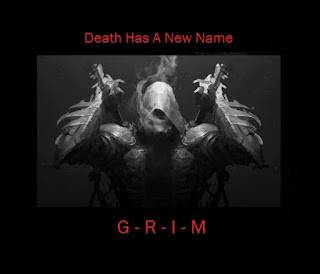 And Remember...
Next week, we go onto excerpts from Hell Bound.

Stay tuned for the dark and diabolical delights to come.
Posted by Andrew P. Weston at 6:36 AM