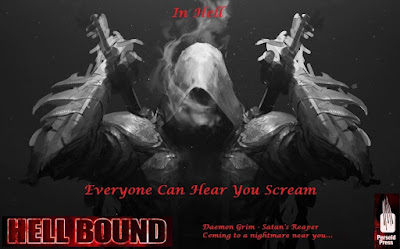 I pushed myself away from the wall, strode across the sidewalk, and headed toward the gently undulating wall of mystery. Passersby checked their step as they realized where I was heading. Cars screeched to a halt.
Seizing on the lull, Nimrod called, “Can I have first dibs on your apartment when you die? I’ve always wanted rooms with a view.”
I gave him the finger, stepped in . . .
. . . and froze.
I’d expected a gradual transition from light to dark, a sense of being progressively enveloped and transported in some way to a new location. But I didn’t get any of that. In an instant, I was someplace else entirely.
A thick gray soup surrounded me. I couldn’t see the ground beneath my feet, and when I extended my arms, my hands were swallowed whole, as if they didn’t exist. Peering about me, I searched for a focal point on which to establish a plane of reference.
Not a goddam thing. Has the trial started already?
Suddenly wary, I realized it would be best to clear my head, so I took a deep breath, calmed my nerves, closed my eyes, and listened.
Thump — thump, thump — thump, thump — thump . . .
The sound of my heartbeat dominated, its steady rhythm providing an anchor around which to ground myself. I didn’t need a cardiovascular system, of course, but I’d always found the sensation soothing, as it made me feel something I’d never been: normal.
For some reason the enfolding brume exacerbated that beat. It grew louder, and then more distant, as if my heart had suddenly been transposed beyond my flesh.
Thump — thump, thump — thump, thump — thump . . .
Now I was puzzled.
It sounds like it’s getting louder. Drawing closer in some way. But how . . . ?
I opened my eyes and was startled to realize the vapors had folded back to reveal an open tourney field, carpeted with thick, lush grass. White marquees formed a parade on either side of the meadow, each of them bedecked in red and gold pennants. In front of them, equipment racks had been arranged so that unseen champions might chose from a wide assortment of lethal-looking weapons. I completed a quick three-sixty and discovered there was even a fully decorated pavilion behind me, resplendent in the sunshine and festooned with ribbons and bows in the same heraldic colors.
The entire arena lay within a surrounding cocoon of milk-white fog, and despite my best efforts, I couldn’t detect any other unliving soul.
Thud — thud, thud — thud, thud — thud . . .
I spun toward the sound, and a massive shadow detached itself from the mist at the open end of the field. My jaw dropped, for there, not fifty yards away, was an armored warrior atop a midnight-black charger.
Dressed from head to toe in steel, and with the distinctive scarlet and gold inverted long cross emblazoned across his surcoat and shield, I knew without a doubt that this was a Knight Tempter. The horse itself was huge, a courser; its broad chest and powerful body likewise protected by barding, spikes, and leather.
Armor and tack were coated in fine beads of moisture which glistened like diamonds in the imaginary sunlight. Staring at them, I imagined for a moment what it must be like to face such a daunting team in battle.
My thoughts were definitely jinxed lately, for no sooner had I contemplated the notion than the knight lowered his visor and raised his lance in salute. He then put his heels to his mount’s flanks, and the horse jumped forward into a trot.
Mesmerized, I stood rooted to the spot and tried to fathom what it all meant.
Forty yards.
Their speed abruptly increased to a canter.
So, is this part of the process? Am I supposed to react . . . or not?
I chose to react and rolled to one side. As I came up, I unbuttoned my coat and threw back my hood.
Thirty yards.
Rider and steed altered trajectory, and the earth trembled beneath my feet. I gamboled again, and drew my scythe. By the time I had dropped into a fighting crouch, my weapon was extended and primed for combat.
Does he really want me to hamstring his horse? Or worse still, confront him directly?
They accelerated into a gallop. The beast snorted, its nostrils flared. Muscles bulged and the vibrations increased as divots flew. Like a portent of doom, the spear tip lowered.
Intuition kicked in.
No matter what’s taking place, we’re on the same side.
Twenty yards.
We’re on the same side, we’re on the same side, we’re on the same side . . .
Despite the danger of the situation, my gut was telling me not to resist them. They were here to do a job. I had to work with them.
Ten yards.
Oh, bugger! I need a raise.
Against my natural instincts, I collapsed my weapon, stood tall, and threw my arms wide. At the very last moment, I squeezed my eyes shut and yelled, “I am no threat to you, or to the treasures under your protection.”
It seemed like a good idea at the time, but my voice sounded as feeble as a wet fart flying in the face of thunder. As their shadow blotted out the sun, I decided I wasn’t so sure anymore.
Shit! Shit! Shit! Sh-iiit!
“Oof-fuuuuck!”
The tip of the lance struck with the power of a runaway freight train. Piercing leather, fabric, skin and bone, it lifted me high off the ground and carried me through the air as if I were nothing but a rag doll. I couldn’t breathe, I couldn’t think. Nothing else existed except the pain of impalement.


Suddenly, the spear impacted against something hard behind me, and shattered. The shockwave ran along the length of the splinter still embedded in my body and multiplied the agony a thousandfold. As I slid back down onto the wet grass, the knight disappeared, and an ethereal voice hissed, “Impressive . . .”

And Remember...
Next week, we go onto excerpts from Pieces of Hate - as featured in Pirates in Hell.